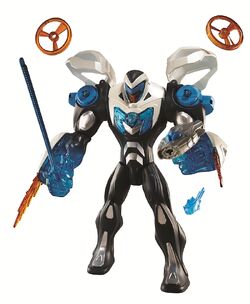 Strength Reveal Max is an action figure based on Max Steel on Turbo Strength Mode. It was released on 2016 on the first wave of action figures.

Max's helmet is mostly white with a blue visor and few orange markings, being also based on Turbo Base Mode helmet. He has white paint job on the upper torso and on the abdomen, the last being two marks. He has white shoulder pads that reveals the launchers on his shoulders, silver marks on both arms, and transparent blue hands. He also have white marks on the knees and feets. Max has four points of articulation, and comes with two accessories.

Max has two launchers integrated to his shoulders that can launch two orange propellers with a ripcord that can also act as a sword. He have two flames that can be revealed when the button on his gauntlets are pressed. He also comes with a silver launcher that was directly copied from Rocket Blaster Max.

Retrieved from "https://max-steel-reboot.fandom.com/wiki/Strength_Reveal_Max?oldid=24804"
Community content is available under CC-BY-SA unless otherwise noted.