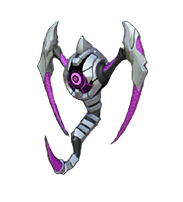 Stinger Ultralinks is a subspecies of Ultralinks. They are featured by their speed and agressivity, abilities that they use to surprise their enemies. One of them appeared for the first time in Ultralink Invasion Part One.

A squadron consisting in four Ultralinks was sent from [[Makino to Miles Dread. One of them was a Stinger Ultralink, who in the future would link with a Venus fly-trap and create Chomp Link, a recurrent villain in the second season.

Theese Ultralinks are aggressive and fast - watch the skies or you'll be surprised!

Aggressive, fast, and sometimes invisible - they fight to escape your Turbo Lash!

The most tricky of Stinger Ultralink, they stay invisible and move fast!

They have a spherical head with an arm on each side of their body with sharp edges. They have a salience on the top of their head which is similar to Ven-Ghan's hair. They also have a segmented stinger coming out of their body, hence their name.

Retrieved from "https://max-steel-reboot.fandom.com/wiki/Stinger_Ultralinks?oldid=28705"
Community content is available under CC-BY-SA unless otherwise noted.