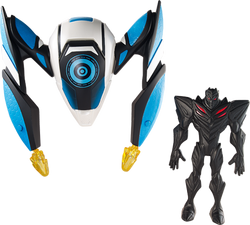 Steel Spin and Launch (unofficial name) is an action figure based on Steel and Miles Dread. The figure was released in 2015 in the second wave of action figures, as a part of Battle-Tek line.

In this toy, Steel is seen exactly as in the show, however, he has few changes, notably seen in the arms, and in the tip of them, where the missiles are placed. It also comes with a little target of Miles Dread, which has red paint application in the face and chest. The figure doesn't have any points of articulation, but comes with three projectiles and one target.

The figure of Steel can extend its arms to launch the projectiles, and is able to launch one disk through his white part. Like stated above, the figure also comes with a figure of Miles Dread, which is a target.

Retrieved from "https://max-steel-reboot.fandom.com/wiki/Steel_Spin_and_Launch?oldid=23797"
Community content is available under CC-BY-SA unless otherwise noted.