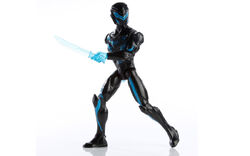 Stealth Strike Max is one of Max Steel's action figures released in the second half of 2014. It is a part of Aerial Invasion subline.

Max wears a full-body armor which is completely black with blue accents in his visor, chest, biceps, abdomen and legs. His hands are made in a transparent blue plastic and he is holding a dagger in his left arm. He has twelve points of articulation and does not come withy any accessory, as he is a basic action figure.

Retrieved from "https://max-steel-reboot.fandom.com/wiki/Stealth_Strike_Max_Steel?oldid=29251"
Community content is available under CC-BY-SA unless otherwise noted.