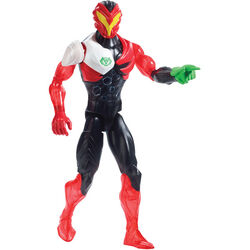 Stealth La Fiera is one of La Fiera's action figures. It was released in 2017 in the first wave of action figures and is a part of Turbo Charged and Connect-Tek.

La Fiera has a red helmet with black details and a visor with the shape of the letter V. La Fiera has a black armor with a white piece in the right part of the chest and shoulder featuring Team Turbo's new green logo, three rips in the left chest and few poligons on his abdomen. He wears a black forearm pad on his left arm with a green glove featuring a blade protuding from its fist. He also wears red boots. La Fiera has eleven points of articulation and doesn't comes with any accessory, since he is a part of the basic subline.

Retrieved from "https://max-steel-reboot.fandom.com/wiki/Stealth_La_Fiera?oldid=29624"
Community content is available under CC-BY-SA unless otherwise noted.