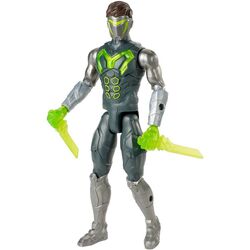 Stealth Attack Max Steel is one of the character's action figures released in the second half of 2017. He is a part of both Turbo-Warriors and Connect-Tek toy lines.

Max wears a silver mask with a green V-shaped visor and a dark grey sleveless armor with the M-shaped logo on the chest, six poligons with green edges on his abdomen and silver boots. He wears a silver gauntlet, Turbo-charged green gloves and his hands are holding daggers with hexagon patterns. He has eleven points of articulation and doesn't comes with any accessory as he is a basic action figure.

Variant with the silver detail on the neck.
Add a photo to this gallery

Retrieved from "https://max-steel-reboot.fandom.com/wiki/Stealth_Attack_Max_Steel_(2017_release)?oldid=29701"
Community content is available under CC-BY-SA unless otherwise noted.