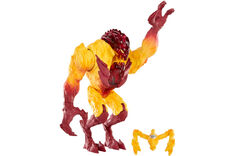 Spitfire Elementor is an action figure of Fire Elementor. It was released in the first half of 2014 as a part of the 6 inch toy line.

Fire Elementor's head is made on a transparent red plastic with yellow paint for his eyes. His jaw also extend to his chest due to his gimmick. He has dark red accents on his chest and abdomen, his hands, forearms and legs are dark red. He has six points of articulation and comes with two accessories.

The figure comes with an Ultralink, which can be placed on Fire's arm or can be either used as a ring. A fire projectile can be placed onto Elementor's mouth, which closes when it is there. Once his arm is pulled down, his mouth opens and it launches the projectile.

Retrieved from "https://max-steel-reboot.fandom.com/wiki/Spitfire_Elementor?oldid=29838"
Community content is available under CC-BY-SA unless otherwise noted.