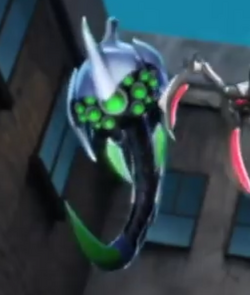 Spiny Ultralinks (unofficial name) are a unnamed subspecies of Ultralinks. One of them appeared for the first time in My Best Friend is an Ultralink.

My Best Friend is an Ultralink

A Spiny Ultralink bonded with Kirby Kowalski and as result Soda Link was born. The Ultralink took control of his body and forced him to attack Max, but he was eventually unlinked from his host by Ven-Ghan and sent to the Black Star Council, where he was presumably destroyed by its crimes.

The only known variation of this subspecies.

Their body's structure is similar to a snake. They have many eyes and a silver shell with a line of spikes that goes from their head to the end of their tail. They also have a pair of small arms coming out of their body and their segmented tail has a sting.

Retrieved from "https://max-steel-reboot.fandom.com/wiki/Spiny_Ultralinks?oldid=28717"
Community content is available under CC-BY-SA unless otherwise noted.