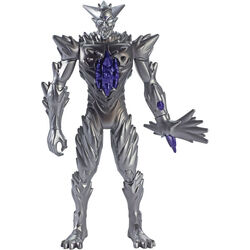 Spikes Terrorax is an action figure based on Terrorax. It was released in the first half of 2017 and is a part of Turbo-Charged subline.

"Inspired by the new animated movie Turbo-Charged where Max goes Green Turbo and Steel separates from him, this collectible 6” action figure lets fans play as key villain Terrorax! With 5 points of articulation, iconic details, a hand that grips accessories and another that wields a terror spike fist, he’s armed to attack Max Steel and Team Turbo! Can Max and Team Turbo rise to the next level and defeat the dark energy of evil Terrorax? You can also the other figures in the assortment to take him on like Turbo Sword Max, Turbo Punch Max and Turbo Gun Max."

Terrorax is in a smaller scale and is a six inch toy similar to other figures of the set. He has a pair of horns on both sides of his head, white eyes, a triangle on his forehead and his mouth is shaped like he is always smiling, thus also showing his spiky teeth. He has many spikes on his shoulders, arms and legs. He has a triple purple saw coming out from his chest and he has an axe on his left arm. He has four points of articulation and doesn't comes with any accessories.

Retrieved from "https://max-steel-reboot.fandom.com/wiki/Spikes_Terrorax?oldid=29748"
Community content is available under CC-BY-SA unless otherwise noted.