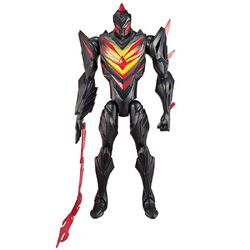 Spike Whip Dread is one of Miles Dread's action figures. This figure was released in 2015 in the first wave of action figures and was a part of the Transform-Tek toy line.

Miles Dread's armor largely resembles his main mode from the show, with the exception of few changes. His armor is mostly black with angular shapes and red accents on the left arm, face and chest, with the latter having yellow added to it. He has seven points of articulation and doesn't comes with any accessory.

Due to the fact that he is a part of the Transform-Tek toy line, Dread has a transformation process. He has a hidden spike on his head and other two on his right arm. He also has a hidden whip on his left arm, which is poseable and features four articulated points.

Spanish version containing the DVD.
Add a photo to this gallery

Retrieved from "https://max-steel-reboot.fandom.com/wiki/Spike_Whip_Dread?oldid=29856"
Community content is available under CC-BY-SA unless otherwise noted.