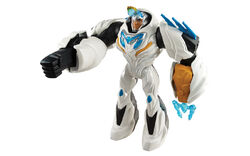 Spike Spin Max is an action figure based on Max Steel. It was released in 2015 in the first wave of action figures, and is a part of Battle-Tek line.

The figure seems to be a fusion between Turbo Spike Mode and Turbo Heat Mode. It is mostly white with black details on the legs, arms, and head, and blue details in the legs, and spikes on the shoulders. The figure has only four points of articulation, and comes with two accessories.

The figure, is able to spin when the legs and waist are rotated. Max also features gimmicks on both cannons, the left one is able to punch when a button is pressed, and the other is able to launch the projectile with the shape of Steel, while the cannon also expands. It comes with a mask that can be inserted into Max's face.

Retrieved from "https://max-steel-reboot.fandom.com/wiki/Spike_Spin_Max?oldid=18708"
Community content is available under CC-BY-SA unless otherwise noted.