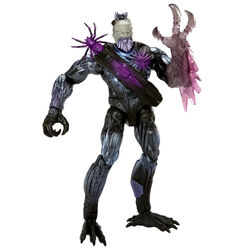 Spider Extroyer is one of the character's action figures. It was released in the first half of the 2014 toy line and belonged to the Land Invasion subline.

Extroyer has pink eyes, dark purple teeth and his jaw is entirely made out of crystals. The back of his head has four pink eyes, a portion of crystals incrusted in the right side of his forehead and purple teeth. Extroyer's body is mostly black but he has purpish silver accents on many paarts of his body, such as his chest, forearms, thighs and shins. Much like previous releases, the right side of his shoulder has purple crystals and he has a monstrous right hand with many crystals and three claws. His left hand features three clawed fingers and he has four toes on each feet. He has eight points of articulation and comes with one accessory.

The figure's design allows him to change to a spider. Extroyer's arm and legs can be split in half to simulate the eight legs of an actual spider and a button on his chest allows his head to turn into that of a spider. He also comes with a black blaster which can fire a mini purple spider. The accessory can be also held either by his left hand or be inserted onto his abdomen.

Retrieved from "https://max-steel-reboot.fandom.com/wiki/Spider_Extroyer_(Action_Figure)?oldid=29867"
Community content is available under CC-BY-SA unless otherwise noted.