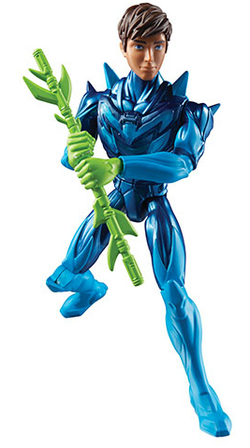 Spear Assault Max is an basic action figure based on Max Steel, slightly using Turbo Spike Mode. It was released in 2015 in the first wave of action figures, and is a part of Battle-Tek line.

In this figure, Max is using a "basic version" of Turbo Spike Mode. The figure is completelly blue with darker tons, has spikes on the back, and only the hands are green. The figure has standard articulation (twelve points), and does not comes with any accessory.

In each hand of the figure, there is a spear with spikes on it, which can be combined to form a bigger spear. The spear is not removable, and is a part of the sculpture.

Retrieved from "https://max-steel-reboot.fandom.com/wiki/Spear_Assault_Max?oldid=19272"
Community content is available under CC-BY-SA unless otherwise noted.