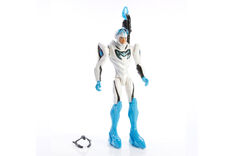 Sonic Speed Max Steel is one of the character's action figures. It was released in the first half of 2014 and belonged to the Land Invasion subline.

Max's armor is mostly white, with the exception of his hands and boots, which are blue. He has black accents on his neck, black and blue accents shaped in a similar way as triangles on his shoulder pads and black lines on his thighs. Max features sixteen points of articulation and comes with five accessories.

Max comes with a black and blue mask, a black-blue-white blaster that can shoot one missile and a small mini figure of Steel. He also comes with a pair of "shoes" which feature wheels and are meant to be inserted onto the sole of his boots, thus allowing him to roll like if he was running with his Turbo Speed Mode.

Retrieved from "https://max-steel-reboot.fandom.com/wiki/Sonic_Speed_Max_Steel?oldid=29879"
Community content is available under CC-BY-SA unless otherwise noted.