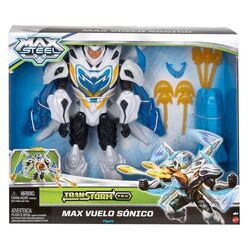 The figure has the exactly same look as seen in the animation. The figure is mostly white with black parts, and has blue transparent parts in the shoulders and chest. The figure has twelve points of articulation, and comes with three accessories, and five projectiles.

Retrieved from "https://max-steel-reboot.fandom.com/wiki/Sonic_Flight_Max?oldid=23647"
Community content is available under CC-BY-SA unless otherwise noted.