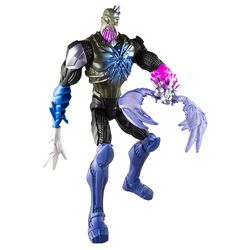 Scorpion Sting Extroyer is one of the character's action figures. It was released on the first half of 2015 and belonged to the Battle-Tek subline.

"Extroyer can morph with any creature and when he absorbs a scorpion the result is the deluxe 12-inch Scorpion Sting Extroyer! He stalks his prey and attackes with a claw pinch on one arm and a whip tail attack on the other. Remove the tail to mount on his chest for even more insect-intense combat options!"

Extroyer has a pale skin color, purple silver eyes, purple crystals emerging from the left side of his head, he has spiky teeth, his jaw is entirely made out of crystals and he has scorpion preys on his mouth. He wears a black armor with blue shading on the chest, which possesses few crystals, a silver purple shoulder pad on the right arm and purple boots. He has few crystals on his left forearm and his right forearm has a pink/purple mutated scorpion. He has nine points of articulation and comes with one accessory.

He can move the scorpion claws by moving the button on his mutated arm. He comes with a crystal that resembles the tip of a scorpion tail. It can be either inserted on his left "hand" or on his shoulder.

Latin American version.
Add a photo to this gallery

Retrieved from "https://max-steel-reboot.fandom.com/wiki/Scorpion_Sting_Extroyer?oldid=30199"
Community content is available under CC-BY-SA unless otherwise noted.