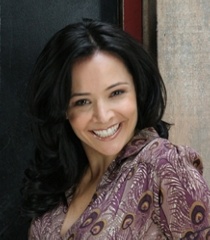 Sarah Edmondson (born June 22, 1977 in Vancouver, British Columbia) is a Canadian actress and voice actress. She started her acting career with the Jewish Young People's Theatre and Lord Byng Theatre Company. She then graduated from Concordia University with a BFA in Theatre Performance. She has performed in a variety of YTV programs including Are You Afraid of the Dark, Student Bodies, Big Wolf on Campus and in series such as Stargate SG-1, Andromeda and Godiva's. She currently can be seen as a regular on CBC's Edgemont. She has created original voices for various Barbie, Bratz and Polly Pocket movies. She also voices a number of animated series, including the characters of Lori, in Transformers: Cybertron and of Atlanta in Class of the Titans. Sarah is recording a TV series based on Geronimo Stilton, where she will be creating the original voice for the female lead, Thea. Sarah is also a playwright. She performed her first play, a solo show, entitled "Dead Bird", at the 2005 Chutzpah Festival. In 2007, Sarah was nominated for the Leo Awards in the category of "Best Lead Performance by a Female in a Short Drama" for her role in the Sparklelite Motel. She also voices some characters from Max Steel (2013 TV Series), like the character, Sydney Gardner.
Retrieved from "https://max-steel-reboot.fandom.com/wiki/Sarah_Edmondson?oldid=21442"
Community content is available under CC-BY-SA unless otherwise noted.