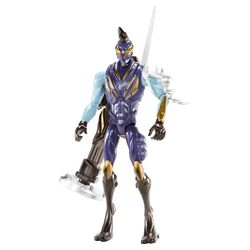 Roto Blast Ven-Ghan is an Action Figure based on Ven-Ghan. It was released in 2014 in the first wave of action figures, and is a part of Aerial Invasion line.

"Meet Ven-Ghan, an intergalactic bounty hunter who joins Max Steel to defeat the Ultralinks. He comes with a blaster that launches a propeller, by winding it up and pressing the button. The blaster can be stored on Ven-Ghan's back. He also comes with a sword and an Ultralink with its own attack action!"

Ven-Ghan's helmet is purple and has yellow details, white spheres, representing his eyes, and a large Mohawk sticking out from his head. Ven-Ghan's armor is completely purple with yellow details featured on the neck and chest, the last possessing a shape similar of how Steel looks when linked with Max. He has black gloves and boots, the last having yellow knee pads. His arms aren't covered by the armor and he has a yellow piece on his right arm. He has twelve points of articulation, and comes with three accessories, including an Ultralink, a blaster and a sword.

Retrieved from "https://max-steel-reboot.fandom.com/wiki/Roto_Blast_Ven-Ghan?oldid=32715"
Community content is available under CC-BY-SA unless otherwise noted.