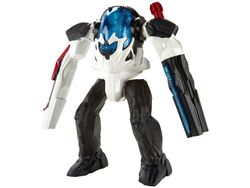 Rocket Nova Max is an action figure based on Max Steel in the Turbo Rocket Nova Mode. This figure was released in 2015 in the first wave of figures, and is a part of Battle-Tek line.

Considering that this is based on Turbo Rocket Nova Mode, the details on it are very limited. The figure also does not have the third cannon in Max's head, but there are a Max Steel sculpted inside, which can be seen through the clear plastic.

Retrieved from "https://max-steel-reboot.fandom.com/wiki/Rocket_Nova_Max?oldid=17812"
Community content is available under CC-BY-SA unless otherwise noted.