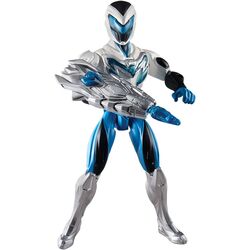 Rocket Blaster Max Steel is an basic action figure based on the character with the same name. It was released in the first wave of the 2015 toy line and is a part of the Connect-Tek subline.

Max wears the same helmet as his Turbo Base Mode. He wears a white armor with blue and black accents and has Steel linked onto his chest. He has black accents on his biceps, forearms and partially on the thighs. His armor becomes blue from his lower torso to his knees and he wears blue gloves. He comes with one accessory and has twelve points of articulation. Max comes with a silver blaster with Steel's insignia on it. It shoots a blue projectile and can be stored into any Connect-Tek ports of Max's body or other characters present in the line.

Retrieved from "https://max-steel-reboot.fandom.com/wiki/Rocket_Blaster_Max_Steel_(2015)?oldid=29857"
Community content is available under CC-BY-SA unless otherwise noted.