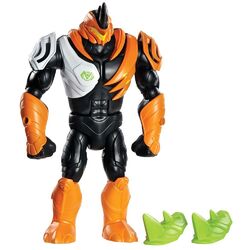 Rhino Attack La Fiera is one of La Fiera's action figures released in 2018. It is a part of the Connect-Tek subline.

La Fiera wears a bulky and muscular armor. He has a orange helmet with black horns, and a V-shaped yellow visor. He has orange rips around his neck and on the left part of his chest and the white piece with Team Turbo's logo on the right part. He wears a white shoulder pad on his left shoulder and a orange pad on his right shoulder. He also has orange forearm pads and orange boots, the latter having rhino-like toes. He comes with twelve accessories and has ten points of articulation.

La Fiera comes with a pair of light green forearm pads that can be inserted onto any Connect-Tek port on his body, such as the forearms or the back, as the toy package recommends. He is also articulated on his waist, which allows him to simulate the attack of an actual rhino.

The pads on La Fiera's back.

Retrieved from "https://max-steel-reboot.fandom.com/wiki/Rhino_Attack_La_Fiera?oldid=30006"
Community content is available under CC-BY-SA unless otherwise noted.