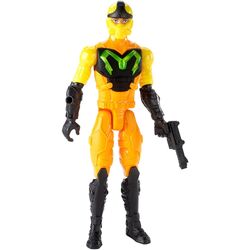 Rescue Max Steel is one of character's toys released in the first half of 2017. He is a part of both Turbo Missions and Connect-Tek sublines.

Max wears a light yellow mask with a black detail on his forehead. He wears a yellow armor with the M-shaped logo on the chest with a black chestplate with hoses connected to it, black gauntlets and black boots. He is also carrying a gun on his left hand. He has eleven points of articulation and doesn't comes with any accessory, as he is a basic action figure.

Retrieved from "https://max-steel-reboot.fandom.com/wiki/Rescue_Max_Steel?oldid=29720"
Community content is available under CC-BY-SA unless otherwise noted.