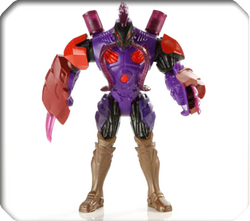 Rapid Attack Toxzon is an action figure based on Toxzon in Toxic Bacteria mode. It was released in 2013, as a part of Speed line.

The figure has the armor mostly purple, with red details on the torso, shoulders, and arms, black parts on the arms, legs and face, and brown boots. Toxzon has eight points of articulation and does not come with any accessory, but has one gimmick.

The gimmick, is that the claws on his hands are retractile, and they can be activated through a button in the sides of the hands.

Retrieved from "https://max-steel-reboot.fandom.com/wiki/Rapid_Attack_Toxzon?oldid=18203"
Community content is available under CC-BY-SA unless otherwise noted.