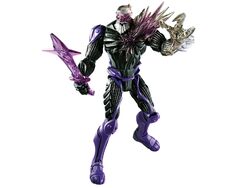 Quick Strike Extroyer is one of the character's action figures. It was released on the first half of 2013 and belonged to the Speed toy line.

Extroyer has a transparent head with white eyes and a large mouth filled with spiky teeth and his jaw is entirely made out of crytals. His head also has a purple shading. He wears a black armor with purple accents on the waist and thighs. He wears a purple shoulder pad on his left shoulder and purple boots. His left arm lacks the shoulder pad and it has a monstrous transparent hand with three claws and many crystals. He has eleven points of articulation and comes with four accessories.

He comes with a purple sword that can fit on his right hand and three projectiles that can be fired by his left mutated hand. These projectiles can be also stored on the crystals on his shoulders.

Prototype.
Add a photo to this gallery

Retrieved from "https://max-steel-reboot.fandom.com/wiki/Quick_Strike_Extroyer?oldid=30193"
Community content is available under CC-BY-SA unless otherwise noted.