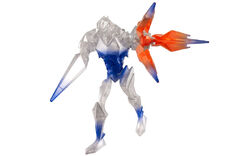 Power Spike Prism Link is the only action figure of Prism Link. It was released on the second half of 2014 and belonged to the Land Invasion subline.

Prism Link features a completely translucent skinny body with angular shapes. He has blue accents on the tips of his spike "hands", torso and ankles. His left claw also orange inside. He has seven points of articulation and doesn't comes with any accessory.

Prism Link's both arms have gimmicks. His right one can launch itself as a projectile and the right can divide itself in three.

Retrieved from "https://max-steel-reboot.fandom.com/wiki/Power_Spike_Prism_Link?oldid=30005"
Community content is available under CC-BY-SA unless otherwise noted.