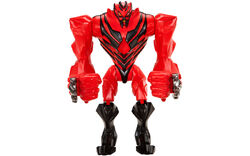 In this version, the details on Dredd aren't like the USA version, and even the gimmick is the same. The paint job are only visible in the torso and head, the figure have only seven points of articulation, and comes with four projectiles.

Those projectiles can be inserted into Miles Dredd's hands, and when Dredd is pulled back and his hands hits the ground, the projectiles will be launched. 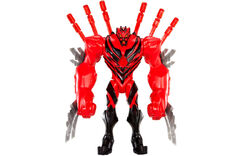 In this version, Dredd is more detailed and have more spikes than the Latin America version, and he comes with more accessories. Also, he is less taller when compared to the Latin America Version. Most of the details are the same, alongside with the articulation. The figure comes with three projectiles and one Ultralink.

The gimmick is the same when compared to his Latin America Version, but he can launch three projectiles at the same time instead of launching only two. Also, he comes with an Ultralink, that can be inserted in his legs, and is able to jump when pressed.

Retrieved from "https://max-steel-reboot.fandom.com/wiki/Power_Slam_Dredd?oldid=25555"
Community content is available under CC-BY-SA unless otherwise noted.