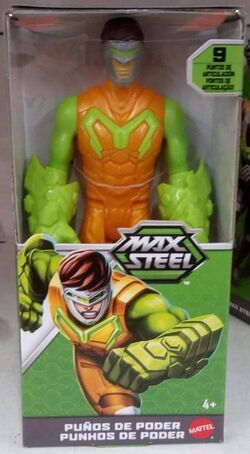 Power Fists Max Steel is one of the character's action figures released in 2018. It doesn't belongs to any subline.

Max wears a silver mask with a V-shaped green visor that partially covers his face, showing his hair and nose and mouth. He wears a orange armor with the green M-shaped logo on his chest and silver boots. His arms are green and he has large power gloves. He has nine points of articulation and doesn't comes with any accessories.

Retrieved from "https://max-steel-reboot.fandom.com/wiki/Power_Fists_Max_Steel?oldid=29944"
Community content is available under CC-BY-SA unless otherwise noted.