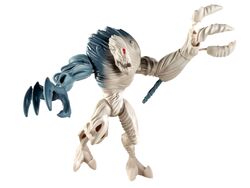 Night Wind Elementor is one of Air Elementor's action figures. It was released on the second half of 2013 and belonged to the Stealth subline.

Elementor has a monstrous body type that has a similar texture to a tornado. He has white eyes, white spiky teeth and a red core on his forehead. His body is mostly white and right half of his shoulder and right arm are dark grey. The right side of his body is slightly different than the left, as he has holes on his arm and leg and his hand has four fingers unlike the left that has only three. He has six points of articulation.

His left arm features a dark grey "stick" that can spin along with Elementor's claws and simulate a tornado.

Purple variant.
Add a photo to this gallery

Retrieved from "https://max-steel-reboot.fandom.com/wiki/Night_Wind_Elementor?oldid=30126"
Community content is available under CC-BY-SA unless otherwise noted.