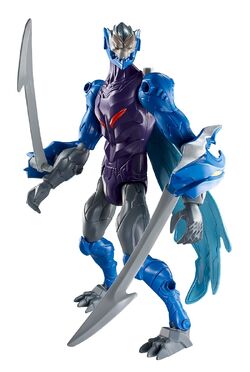 Night Howl is the only action figure released for Night Howl, released in the second half of 2017. It is a part of both Connect-Tek and Turbo-Warriors sublines.

"Get ready for three villainous modes of play with the 12-inch, deluxe Max Steel Night Howl figure! The Night Howl villain figure changes into three modes: cloak mode, blade mode and wolf mode. Plus, the figure also has three attachment pieces including two blades and a tail/cloak. For extra play value, the two blade attachments join together to become a mask. Max Steel™ has his battle set out for him against this triply treacherous villain! Recreate favorite epic battles or wage new adventures! Includes Night Howl figure and blade attachments."

Retrieved from "https://max-steel-reboot.fandom.com/wiki/Night_Howl_(action_figure)?oldid=29757"
Community content is available under CC-BY-SA unless otherwise noted.