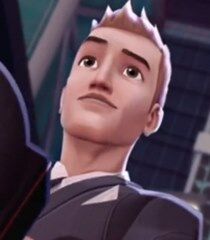 News Reporter, sometimes referred as Reporter or News Anchor minor character introduced in Season 1 who makes cameos in almost every episode. He usually appears talking about Max Steel's heroic actions on TV. The news reporter debuted in Come Together Part Three and was voiced by Brian Dobson in the first season, while in Season 2 he is voiced by Trevor Devall.

After Max stopped the Thieves, the news reporter appeared and said Max Steel had saved the day again, even though that the citizens didn't knew about Max's secret identity, they were glad that he was there.

He appeared in the beginning of the episode in the TV talking about Max Steel's heroic actions as well the event that would happen consisting in honor Max Steel by inaugurating a statue.

Overtime, the news reporter regularly appeared talking about Extroyer's villainous actions, like when he scared Mama Moco or destroyed many buildings just for fun.

He appeared talking about the mysterious "techno-virus" that infected everyone into zombies on Copper Canyon and the military that were trying to contain the virus to not go any further. He was going to present Georgina Romero, but she was turned into a zombie and ultimately infected him.

Retrieved from "https://max-steel-reboot.fandom.com/wiki/News_Reporter?oldid=31936"
Community content is available under CC-BY-SA unless otherwise noted.