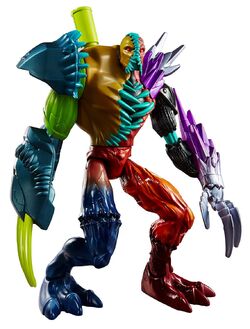 Mutant Morphos is one of the character's action figures. It was released on the second half of 2015 and belonged to the Battle-Tek subline.

Morphos has a muscular and irregular body type. He has red eyes and a vertical line made out of crystals that separates the yellow and maroon sides of his head and that also simulates his mouth. Morphos has a bulky and muscular torso with a cavity surrounded by blue crystals that goes fvrom his neck to his lower abdomen. He also has Extroyer's crystals on the left side of the chest and a green barrel on his back. Toxzon's arm has a dark blue shoulder pad with blue crytals and grey forearm pads with three green claws. Extroyer's arm has the same characterstics from the character's mutated arm, being these the mutated three-clawed hand and the purple crytals. Morphos has the legs of Water and Fire Elementors, both also ending with three clawed toes. He has nine points of articulation and comes with three accessories.

Toxzon's arm can reveal three claws and Morphos has a punching action activated by turning his waist. Extroyer's arm can launch a projectile, which can be stored on Morphos' purple crytals and replaced with a new one. The parts divided by crystals can be also expanded, making Morphos appear to be larger. Additionally, the shoulder pad from Toxzon's shoulder can be also removed.

Retrieved from "https://max-steel-reboot.fandom.com/wiki/Mutant_Morphos?oldid=30162"
Community content is available under CC-BY-SA unless otherwise noted.