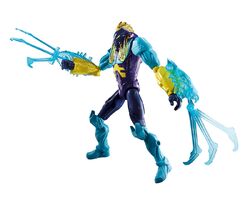 Mutant Claw Toxzon is Toxzon's only action figure released in 2017. He is a part of both Connect-Tek and Turbo Missions sublines.

Toxzon, unlike othe releases, features a skinny build. He has a dark blue helmet with yellow eyes, transparent yellow hoses attached from his face to his shoulders, a light blue marking on his upper chest and a yellow pattern on his lower torso. He has blue shoulder pads and biceps, yellow gauntlets and blue hands. He also wears light blue boots. He has ten points of articulation and comes with eight accessories.

Toxzon comes with a pair of Goopanoids with a total of six removable claws. His body features many Connect-Tek ports, which allows the creation of many modes.

Retrieved from "https://max-steel-reboot.fandom.com/wiki/Mutant_Claw_Toxzon?oldid=29718"
Community content is available under CC-BY-SA unless otherwise noted.