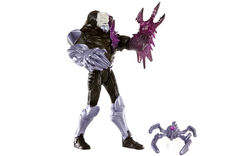 Mutant Beast Extroyer is one of Extroyer's action figures, this time based on his gorilla mode. It was released in the first half of 2014 and is a part of the unnamed six inch toy line.

Extroyer has almost the same exact appearance as his animation counterpart. He has white eyes, a jaw entirely made out of spikes and his armor is mostly black. He wears a purple shoulder pad on his right arm, he has purple crystals protuding from his left shoulder and a mutated hand featured three fingers and crystals in the forearm. Extroyer has twelve points of articulation and comes with two accessories.

He comes with a gorilla forearm that can be placed on his right forearm and an Ultralink that matches Extroyer that can also serve as a ring. Extroyer also has a button on his shoulder that can switch his human head to a gorilla head.

Retrieved from "https://max-steel-reboot.fandom.com/wiki/Mutant_Beast_Extroyer?oldid=29858"
Community content is available under CC-BY-SA unless otherwise noted.