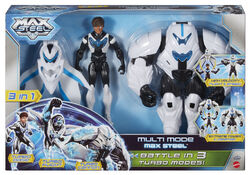 Multi Mode Max Steel is a set of action figures based on Max Steel using Turbo Base Mode, Turbo Flight Mode, and Turbo Cannon Mode. It was released in 2014 as a part of 6 Inch Line.

The set includes three different types of Turbo Modes. The standard figure is the Turbo Base Mode, with the appearence and colours as seen in the show, though that Max is helmetless. The Turbo Flight Mode is only seen as a part of the torso, featuring the wings and different helmet. The Turbo Cannon Mode has a bigger armor, featuring an complete transformation of the figure. The Turbo Base figure has twelve points of articulation, and can interchange between three Turbo Modes.

Retrieved from "https://max-steel-reboot.fandom.com/wiki/Multi_Mode_Max_Steel?oldid=22578"
Community content is available under CC-BY-SA unless otherwise noted.