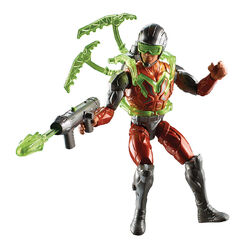 "Join Max Steel on extreme mountain missions with this ultimate deluxe 12” action figure! Max Steel is geared up for combat in a backpack with a special helicopter mechanism, a projectile launcher, 2 pick axes, goggles and a climbing drone, that surveys the rocky terrain ahead. And that’s not all, Max has an automatic scaling mechanism to hoist him up to peak heights. With his multiple Connect-Tek ports, you can switch weapon accessories to engage in a variety of cliff-shredding battles. When he comes face to face with the lethal Mortum, Max can hurl a climbing hook at his wing or Mask to remove them and bring the villain down!"

Turbo-Charged variant.
Add a photo to this gallery

Retrieved from "https://max-steel-reboot.fandom.com/wiki/Mountain_Combat_Max_Steel?oldid=29673"
Community content is available under CC-BY-SA unless otherwise noted.