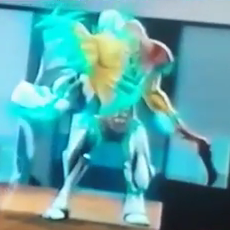 The second time that Max Steel and Morphos meet, they were in an ocean fighting, where Morphos used his tentacle to absorb Max Steel's Turbo Flight Mode.

In a battle against Max Steel, Morphos absorbed Max's Turbo Flight Mode, and used it to chase it. Later, he used this mode during the invasion in N-Tek, to destroy C.Y.T.R.O.'s shield, and later absorb his powers. Morphos also used this mode when he invaded the apartment of the McGrath, where he tried to kill Molly McGrath, and when he was escaping of Max Steel using Turbo Combo Mode, however, it was useless, because Max launched spikes that destroyed and exploded the wings of this mode.

Retrieved from "https://max-steel-reboot.fandom.com/wiki/Morphos_Turbo_Flight_Mode?oldid=20291"
Community content is available under CC-BY-SA unless otherwise noted.