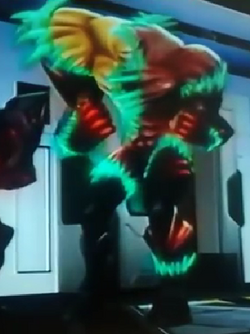 When Morphos was desperate for some answers from Miles Dread, they started to fight, and in the middle of the fight, Morphos released his tentacle and absorbed Miles Dread's powers, creating his new mode.

When Miles Dread and Morphos discussed, he went on rampage, and got this mode. However, while Morphos was about to kill Dread, he teased him about the device that would complete him, making him stop. This mode was later used to invade the apartment of the McGrath Family, and in the final battle against Max Steel.

Retrieved from "https://max-steel-reboot.fandom.com/wiki/Morphos_Miles_Dread_Mode?oldid=22268"
Community content is available under CC-BY-SA unless otherwise noted.