After Morphos failed in defeating Max Steel, he despairingly tried to get the device that supposedly would improve him, created by Miles Dredd. When he absorbed the device, Morphos started to melt, and later, recovered himself; revealing that he is now able to create fusions through this mode.

When Miles Dredd gave Morphos a device that was going to upgrade him, it made Morphos melt, but later recovered himself, and revealed that he got a new ability: to fuse the modes in his arsenal.

Morphos was defeated after Max Steel uses Exo Strength Mode to destroy the device that was in Morphos' chest. His copies were all destroyed and he returned to his base form.

This fusion was the first fusion created by Morphos when he got this mode. In this mode, Morphos is able to shoot red lasers through Miles Dredd's hands, and at the same time, has the power of Turbo Strength Mode. It first appeared in Max Steel: The Dawn of Morphos.

Though that it was expected to appear in Max Steel: Maximum Morphos, it was only seen in the toy line. Morphos is able to launch toxins through Toxzon's arm, launch one projectile through Extroyer's arm, and presumably can create fire walls and waves of water though Fire and Water Elementor.

this is Morphos with the powers of turbo strength mode and Toxzon, he has enhanced strength and he can launch toxins from his right arm.

this Morphos has the powers of Extroyer, Metal Elementor, earth & Fire Elementor he can attack with strength use the wrecking ball create earthquakes and fire walls. 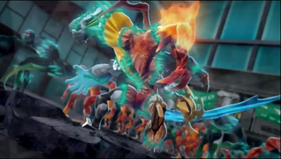 Retrieved from "https://max-steel-reboot.fandom.com/wiki/Morphos_Fusion_Mode?oldid=30351"
Community content is available under CC-BY-SA unless otherwise noted.