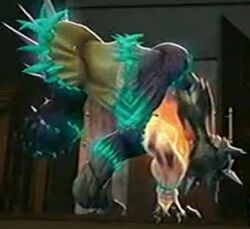 Morphos Extroyer Mode is one of Morphos' transformations. This transformation have the characteristcs of Extroyer Gorilla mode. It first appeared in Max Steel: Maximum Morphos.

While Extroyer was stealing a bank, Morphos suddenly appeared and absorbed his powers, later arresting him to the prison, alongside with other villains.

Like other transformations of Morphos, this one wasn't used a lot, but it was used occasionally on the fusions made by Morphos' fusion mode.

Retrieved from "https://max-steel-reboot.fandom.com/wiki/Morphos_Extroyer_Mode?oldid=22262"
Community content is available under CC-BY-SA unless otherwise noted.