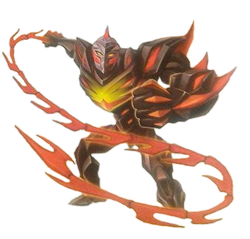 Miles Dredd Spike Mode is one of Miles Dread's modes. Basically, this mode is almost the same when compared to Miles Dread's Main Mode, but it is slightly different, mainly because of the spikes protuding on the arms and head, as well the whip that Dread carries. Until now, the mode didn't appeared in any episodes of the series, but only on toy form.

Since the mode still didn't appeared on the series, there are no origins for it.

The Spike Whip Dread action figure was released on 2015 as a part of Transform-Tek line, as one of the few villains that are Extreme Figures. Dread's transformation process includes revealing the spikes on his right arm and head, as well the parts of the whip that can be extended to reveal it.

Retrieved from "https://max-steel-reboot.fandom.com/wiki/Miles_Dread_Spike_Mode?oldid=26138"
Community content is available under CC-BY-SA unless otherwise noted.