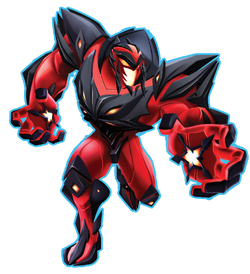 After Makino realized that Max, Steel and Forge Ferrus were in the Makino Destroyer, Dread was sent to fight against them. By absorbing more T.U.R.B.O. Energy from the chamber of the ship, Dread unlocked his new mode, which easily overpowered and resisted to Max's Turbo Modes without much effort. Later on, Steel made a plan consisting in tricking Dread by saying that he would join Makino's forces. While Dread was distracted, Steel activated Turbo Cannon Mode and knocked down Dread by sending him to the core of the chamber, making the Destroyer explode due to Dread's negative charge of his energy.

When Max defeated the trio of the Ultralinks, Dread appeared and attacked him with a sphere of energy and transformed into Makino Mode. While the Ultralinks were in disadvantage against N-Tek's forces, Blast suggested to Dread activate the fourth Ultralink, but it didn't worked, though that Dread's plan successfully worked. By distracting N-Tek with Jason Naught, Dread escaped alongside with the Ultralinks.

Dread activated his Makino Mode in order to defeat Max Steel to become his prisoner. While Max was immobilized by Dread, he activated his Turbo Spike Mode that threw him away, but later he attacks Max and knocks him down and starts to absorb his energy. Max later activates Turbo Stealth Mode and tries to get away, but Dread found him and launched an energy sphere on him, but he managed to escape with Turbo Scuba Mode.

After Morphos was defeated, Dread absorbed enough T.U.R.B.O. Energy to activate his Makino Mode, until Jim and Syd appeared and shot him with a blaster.

Retrieved from "https://max-steel-reboot.fandom.com/wiki/Miles_Dread_Makino_Mode?oldid=28601"
Community content is available under CC-BY-SA unless otherwise noted.