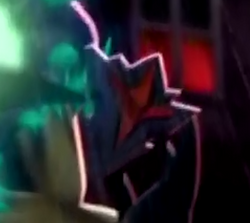 Miles Dread's Security Device is a small black object that was supposed to destroy Morphos if he had turned into an uncontrollable monster. However, rather than destroying him, the device instead greatly improved Morphos' powers, mainly his Reactive Adaptation, giving him the ability of combining more than two modes at the same time. It appeared for the first time in Dawn of Morphos.

The device was first seen on Dread's hands shortly after Morphos' creation. He stated that if Morphos had managed to destroy Max Steel, he would give the answers about his creation and purpose.

Later on, when Morphos got angry at Dread and ultimately tried to finish off him, Dread teased Morphos by showing the device and saying he never would get the answers. The monster eventually stopped and he obeyed the orders of his creator.

After Morphos' crushing defeat, Dread appeared on his mansion with the device and once again teased Morphos with it. Eventually, Morphos violently takes the device away from Dread's hands and absorb it, but as result he started to melt until he turned into a dark orange mass, which Dread steps and says he was nothing. In fact, Morphos managed to absorb the device and improve his powers considerably and would later return to get revenge on his creator.

Though that the device was not seen during most of the film, it was stored inside of Morphos' body and held by few "veins" on his cavity.

Max Steel later on manages to destroy this device by launching a large T.U.R.B.O. Energy projectile on it, thus making Morphos lose his powers and leaving permanent consequences to him, such as being stuck on his main form and being unable to regenerate.

Retrieved from "https://max-steel-reboot.fandom.com/wiki/Miles_Dread%27s_Security_Device?oldid=30341"
Community content is available under CC-BY-SA unless otherwise noted.