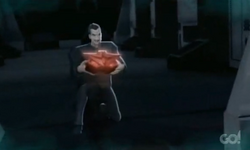 Miles Dread's Device is a device built by Miles Dread while he was working on N-Tek.

After realizing the immense potential of Jim McGrath's T.U.R.B.O. Energy, Miles Dread created a device to harness it for his own gain. He uses it during the Turbo Star test, but it goes horribly wrong: Jim is sent to the space, Steel is shut down and the device gets stuck on Miles' chest. Because of that, Miles now needs T.U.R.B.O. Energy in order to survive.

The device is capable of absorbing Max Steel's T.U.R.B.O. Energy and instantly convert it into Negative T.U.R.B.O. Energy, which Dread uses to fight against his adversaries. Depending on the amount of energy that the device absorbed, its plates will expand and consequently change Miles' appearance, making him gain more body mass.

The device gives various powers to Dread. If it is lightly loaded, Dread's powers are minimal and he becomes a weak and thin man, but if it is heavily loaded, his body mass will increase and he will get new powers. His power mode can also generate weapons of mass destruction made out of Negative T.U.R.B.O. Energy, such as gigantic energy spheres, blasters and much more.

The device also could store limited quantities of T.U.R.B.O. Energy, but once Dread upgraded it, he now can absorb limitless quantities of said energy.

Retrieved from "https://max-steel-reboot.fandom.com/wiki/Miles_Dread%27s_Device?oldid=28600"
Community content is available under CC-BY-SA unless otherwise noted.