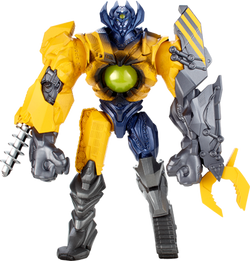 Mega Strike Makino (or Demolition Makino) is one of the character's action figures. It was released in the first half of 2015 and belonged to the Battle-Tek subline.

Makino has a muscular body type which is infused with parts of vehicles used for demolition. His head remains exactly the same as his main mode, having the dark blue armored parts around his head and the Ultralink sphere on his forehead. His upper torso is covered on a yellow armor with black accents around the energy sphere on his torso. His right arm is mostly yellow and has grey accents. His left arm is mostly grey and features a capture claw. His left thigh features a yellow part from the vehicle while the rest of the leg remains the same and his right leg features a grey part from the vehicle, including its wheels. He has seven points of articulation and comes with one accessory.

The figure features three mechanisms: his left arm can shoot a silver projectile, his right arm features a capture claw that moves and he has a button on his back that will raise Makino's armors like if he was smashing something.

Retrieved from "https://max-steel-reboot.fandom.com/wiki/Mega_Strike_Makino?oldid=30133"
Community content is available under CC-BY-SA unless otherwise noted.