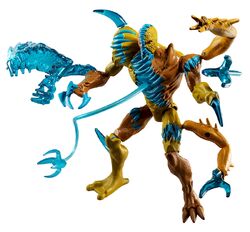 Mega Morphos is an action figure based on Morphos. It was released on 2016 on the first wave of action figures, and is a part of Connect-Tek line.

Morphos has red eyes, a vertical line of crystals on his entire head that separates the maroon and yellow sides of it. He has blue crystals from his upper right chest to his lower abdomen. He has a round right shoulder with a line of crystals and four sharp claws on his hand. His left shoulder has a crystal line as well and he has a hook. He has divisions made out of crystals on both thighs. He has nine points of articulation, and comes with six accessories.

He comes with two curved light spikes, two articulated arms that can launch projectiles, a large transparent tentacle that can attach to Connect-Tek ports of other figures, making a simulation of Morphos absorbing the powers of an specific character and a large creature with sharp teeths, which can serve as an annex on his back.

Add a photo to this gallery
Retrieved from "https://max-steel-reboot.fandom.com/wiki/Mega_Morphos?oldid=26947"
Community content is available under CC-BY-SA unless otherwise noted.