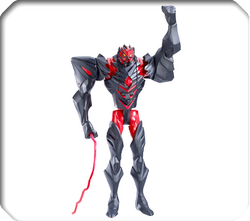 Mega Morph Dredd is an action figure based on Miles Dredd, in the T.U.R.B.O. Energy Mode and in his Main Mode. It was released in 2014 in the second wave of figures, and is a part of Aerial Invasion line.

The figure mostly is black alongside with red paint job in the head, arms, chest, and legs. The figure only have four points of articulation, and comes with only one accessory.

When Dredd's arms are separated, his head will spin and change to his T.U.R.B.O. Energy Mode, and also, his legs can be expanded. Also, Dredd have holes in his both hands, so he can hold the whip that he comes with.

Retrieved from "https://max-steel-reboot.fandom.com/wiki/Mega_Morph_Dredd?oldid=30370"
Community content is available under CC-BY-SA unless otherwise noted.