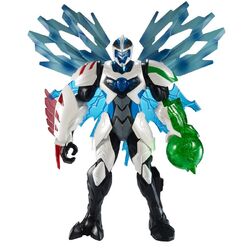 Mega Max Steel is an action figure based on Max Steel's Turbo Mega Mode. It was released in 2016 in the second wave of action figures as a part of both Connect-Tek and Team Turbo Fusion Tek sublines.

Alongside with Scorpion Mortum and Turbo Max Steel, Mega Max is one of the largest figures of the 2016 toy line, having 40-45 cm in total. In this mode, Max is using the powers of each member of Team Turbo. Max has a white helmet with a light blue transparent visor and a spike protuding from his forehead. He has a light blue transparent neck, a white armor that goes from his shoulders to his upper abdomen, where he has a blue streak in the the sides of his torso and a grey streak divided by lines with the shape of the letter M. La Fiera's right arm has two red streaks on the shoulder pads, more three streaks in the forearm pad with a transparent blade and also three claws. C.Y.T.R.O.'s arm has a green horizontal green line, white and green forearm pads and a giant wrecking ball filled with a vertical line of thorns. Tempestra's wings are completely blue and are based off on her Turbo Lightning Storm and Turbo Frost Modes. Max has white pads in the lower abdomen and has La Fiera's right leg and C.Y.T.R.O.'s left leg. Max has five points of articulaton and comes with two accessories.

Max has a wide variety of fuctions in this mode, being one of the few figures having light-up features and sounds in the toy line. La Fiera's clawes are spring-loaded, C.Y.T.R.O.'s wrecking ball is connected to a string and can be launched and Max can switch Tempestra's large wings by pressing his legs together. If Steel is pressed, Max will light-up and at the same time will emit battle sounds. Tempestra's wings and La Fiera's hand are also capable of emiting more sounds, each having around one or two sounds to emit. Max comes with two blue connectable swords which La Fiera's hand can hold. Additionally, his body is full of Connect-Tek ports, so Max can hold even more weapons of other figures.

Mega Max Steel's box
Add a photo to this gallery

Retrieved from "https://max-steel-reboot.fandom.com/wiki/Mega_Max_Steel?oldid=27113"
Community content is available under CC-BY-SA unless otherwise noted.