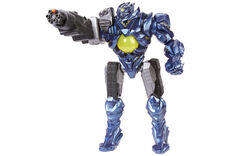 Mega Machine Makino is a action figure based on Makino in an unknown mode. It was released in 2014 in the second wave of action figures, and is a part of Land Invasion.

In this figure, Makino absorbed a gun, and gained the characteristics of one, as seen in the legs, the left arm, and a part of the shoulder. The figure has nine points of movement, and comes with six darts.

The figure has 55cm, and also is able to launch six darts in rapid-fire action.

Retrieved from "https://max-steel-reboot.fandom.com/wiki/Mega_Machine_Makino?oldid=23788"
Community content is available under CC-BY-SA unless otherwise noted.