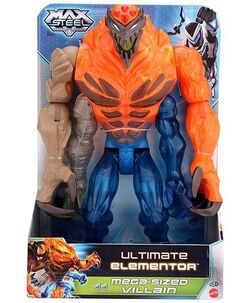 Mega-Sized Villain was a small line released in 2014, being constituted by only two characters: Makino and Ultimate Elementor. Unlike previous worldwide releases, these figures are 12 inches, which is the same size of the regular Latin American releases.

The line was solely constituted by two characters: Makino and Ultimate Elementor and the figures had 12 inches, hence the "Mega-Sized" name. The figures didn't had any kind of gimmick and were articulated in multiple points.

Retrieved from "https://max-steel-reboot.fandom.com/wiki/Mega-Sized_Villain?oldid=30008"
Community content is available under CC-BY-SA unless otherwise noted.