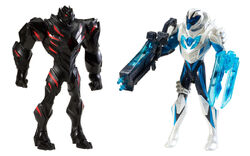 In this pack, Max Steel is usinga mode similiar to Turbo Flight Mode, but with a different design. The armor of it is mostly white with black details on the legs, boots, helmet, and arms, and blue details on the torso, arms, head, and legs. The figure comes with two accessories (one gun that is able to launch two projectiles at the same time light-up, and one shield with Steel's shape in the front), and two projectiles, and have twelve points of articulation.

Miles Dredd has a armor that is mostly black, with red details on the head, torso, arms, and legs. The figure only five points or articulation, and is able extend his hand, and at the same time, his eyes will light-up. 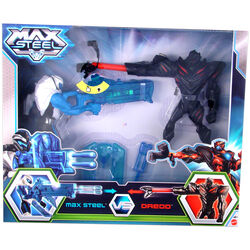 In this pack, Max's armor is almost the same when compared to the Latin America version, only the articulation is different. The figure have only six points of articulation, and comes with two accessories: one gun that is able to light-up while shoots the projectiles, and one shield that can be placed in Max's hands.

The figure of Miles Dredd in this pack is mostly black with red details, like the Latin America counterpart. The figure only have six points of articlulation, and has the same gimmick of his Latin America version: he is able to extend his hand, but is not able to light-up the eyes.

Retrieved from "https://max-steel-reboot.fandom.com/wiki/Max_Steel_VS_Dredd?oldid=30331"
Community content is available under CC-BY-SA unless otherwise noted.